Almost all music and recorded speech that you hear has been sent through at least one compressor at some point during the production process. If you are serious about music production, you need to get familiar with this powerful tool. This means understanding the big picture as well as getting to know each of the parameters (Threshold, Ratio, Attack, Release, Make-Up Gain) intimately.

Throughout any song the volume level varies over time. It might hover around – 6 dB in the verse, rise to – 2 dB in the first chorus, drop to – 8 dB in the interlude, and so on. A term that is worth knowing in this context is the dynamic range. It refers to the difference in volume level from the softest to the loudest part. Some genres of music, such as orchestral music, generally have a large dynamic range, while for mainstream pop and rock a much smaller dynamic range is desired. A symphony might range from – 20 dB in the soft oboe solo to – 2 dB for the exciting final chord (dynamic range: 18 dB), whereas your common pop song will rather go from – 8 dB in the first verse to 0 dB in the last chorus (dynamic range: 8 dB).

During a recording we have some control over what dynamic range we will end up with. We can tell the musicians to take it easy in the verse and really go for it in the chorus. But of course this is not very accurate and we’d like to have full control of the dynamic range rather than just some. We’d also like to be able to to change the dynamic range later on. Compressors make this (and much more) possible.

Here’s a summary of the process:

As you can see, the compressor had a significant effect on the dynamic range. Choosing appropriate values for the threshold and ratio, we are free to compress the song to any dynamic range we desire. When using a DAW (Digital Audio Workstation such as Cubase, FL Studio or Ableton Live), it is possible to see the workings of a compressor with your own eyes. The image below shows the uncompressed file (top) and the compressed file (bottom) with the threshold set to – 12 dB and the ratio to 2:1. 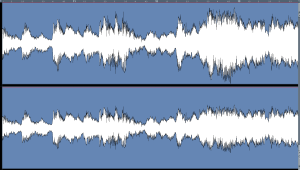 The soft parts are identical, while the louder parts (including the short and possibly problematic peaks) have been reduced in volume. The dynamic range clearly shrunk in the process. Note that after applying the compressor, the song’s effective volume (RMS) is much lower. Since this is usually not desired, most compressors have a parameter called make-up gain. Here you can specify by how much you’d like the compressor to raise the volume of the song after the compression process is finished. This increase in volume is applied to all parts of the song, soft or loud, so there will not be another change in the dynamic range. It only makes up for the loss in loudness (hence the name).

We already got to know one application of the compressor: controlling the dynamic range of a song. But usually this is just a first step in reaching another goal: increasing the effective volume of the song. Suppose you have a song with a dynamic range of 10 dB and you want to make it as loud as possible. So you move the volume fader until the maximum level is at 0 dB. According to the dynamic range, the minimum level will now be at – 10 dB. The effective volume will obviously be somewhere in-between the two values. For the sake of simplicity, we’ll assume it to be right in the middle, at – 5 dB. But this is too soft for your taste. What to do?

You insert a compressor with a threshold of – 6 dB and a ratio of 3:1. The 4 dB range from the minimum level – 10 dB to the threshold – 6 dB is unchanged, while the 6 dB range from the threshold – 6 dB to the maximum level 0 dB is compressed to 6 dB / 3 = 2 dB. So overall the dynamic range is reduced to 4 dB + 2 dB = 6 dB. Again you move the volume fader until the maximum volume level coincides with 0 dB. However, this time the minimum volume will be higher, at – 6 dB, and the effective volume at – 3 dB (up from the – 5 dB we started with). Mission accomplished, the combination of compression and gain indeed left us with a higher average volume.

In theory, this means we can get the effective volume up to almost any value we desire by compressing a song and then making it louder. We could have the whole song close to 0 dB. This possibility has led to a “loudness war” in music production. Why not go along with that? For one, you always want to put as much emphasis as possible on the hook. This is hard to do if the intro and verse is already blaring at maximum volume. Another reason is that severely reducing the dynamic range kills the expressive elements in your song. It is not a coincidence that music which strongly relies on expressive elements (orchestral and acoustic music) usually has the highest dynamic range. It needs the wide range to go from expressing peaceful serenity to expressing destructive desperation. Read the following out loud and memorize it: the more expression it has, the less you should compress. While a techno song might work at maximum volume, a ballad sure won’t.

Talking about how loud something is can be surprisingly complicated. The problem is that our brain does not process sound inputs in a linear fashion. A sound wave with twice the sound pressure does not necessarily seem twice as loud to us. So when expressing how loud something is, we can either do this by using well-defined physical quantities such as the sound pressure level (which unfortunately does not reflect how loud a person perceives something to be) or by using subjective psycho-acoustic quantities such as loudness (which is hard to define and measure properly).

Sound waves are pressure and density fluctuations that propagate at a material- and temperature-dependent speed in a medium. For air at 20 °C this speed is roughly 340 m/s. The quantity sound pressure expresses the deviation of the sound wave pressure from the pressure of the surrounding air. The sound pressure level, in short: SPL, is proportional to the logarithm of the effective sound pressure. Long story short: the stronger the sound pressure, the higher the SPL. The SPL is used to objectively measure how loud something is. Another important objective quantity for this purpose is the volume. It is a measure of how much energy is contained in an audio signal and thus closely related to the SPL.

A subjective quantity that reflects how loud we perceive something to be is loudness. Due to our highly non-linear brains, the loudness of an audio signal is not simply proportional to its SPL or volume level. Rather, loudness depends in a complex way on the SPL, frequency, duration of the sound, its bandwidth, etc … In the image below you can see an approximation of the relationship between loudness, SPL and frequency.

What’s the ideal threshold to use? This depends on what you are trying to accomplish. Suppose you set the threshold at a relatively high value (for example – 10 dB in a good mix). In this case the compressor will be inactive for most of the song and only kick in during the hook and short peaks. With the threshold set to a high value, you are thus “taking the top off”. This would be a suitable choice if you are happy with the dynamics in general, but would like to make the mix less aggressive.

What about low thresholds (such as -25 dB in a good mix)? In this case the compressor will be active for the most part of the song and will make the entire song quite dense. This is something to consider if you aim to really push the loudness of the song. Once the mix is dense, you can go for a high effective volume. But a low threshold compression can also add warmth to a ballad, so it’s not necessarily a tool restricted to usage in the loudness war.

Onto the ratio. If you set the ratio to a high value (such as 5:1 and higher), you are basically telling the mix: to the threshold and no further. Anything past the threshold will be heavily compressed, which is great if you have pushy peaks that make a mix overly aggressive. This could be the result of a snare that’s way too loud or an inexperienced singer. Whatever the cause, a carefully chosen threshold and a high ratio should take care of it in a satisfying manner. Note though that in this case the compressor should be applied to the track that is causing the problem and not the entire mix.

A low value for the ratio (such as 2:1 or smaller) will have a rather subtle effect. Such values are perfect if you want to apply the compressor to a mix that already sounds well and just needs a finishing touch. The mix will become a little more dense, but its character will be kept intact.

There are two important parameters we have ignored so far: the attack and release. The attack parameter allows you to specify how quickly the compressor sets in once the volume level goes past the threshold. A compressor with a long attack (20 milliseconds or more) will let short peaks pass. As long as these peaks are not over-the-top, this is not necessarily a bad thing. The presence of short peaks, also called transients, is important for a song’s liveliness and natural sound. A long attack makes sure that these qualities are preserved and that the workings of the compressor are less noticeable.

A short attack (5 milliseconds or less) can produce a beautifully crisp sound that is suitable for energetic music. But it is important to note that if the attack is too short, the compressor will kill the transients and the whole mix will sound flat and bland. Even worse, a short attack can lead to clicks and a nervous “pumping effect”. Be sure to watch out for those as you shorten the attack.

The release is the time for the compressor to become inactive once the volume level goes below the threshold. It is usually much longer than the attack, but the overall principles are similar. A long release (600 milliseconds or more) will make sure that the compression happens in a more subtle fashion, while a short release (150 milliseconds or less) can produce a pumping sound.

It is always a good idea to choose the release so that it fits the rhythm of your song (the same of course is true for temporal parameters in reverb and delay). One way to do this is to calculate the time per beat TPB in milliseconds from your song’s tempo as measured in beats per minute BPM and use this value as the point of reference.

If you are not sure where to start regarding attack and release, just make use of the 20/200-rule: Set the attack to 20 ms, the release to 200 ms and work towards the ideal values from there. Alternatively, you can always go through the presets of the compressor to find suitable settings.

You can learn about advanced compression techniques as well as other effects from Audio Effects, Mixing and Mastering, available for Kindle for $ 3.95.